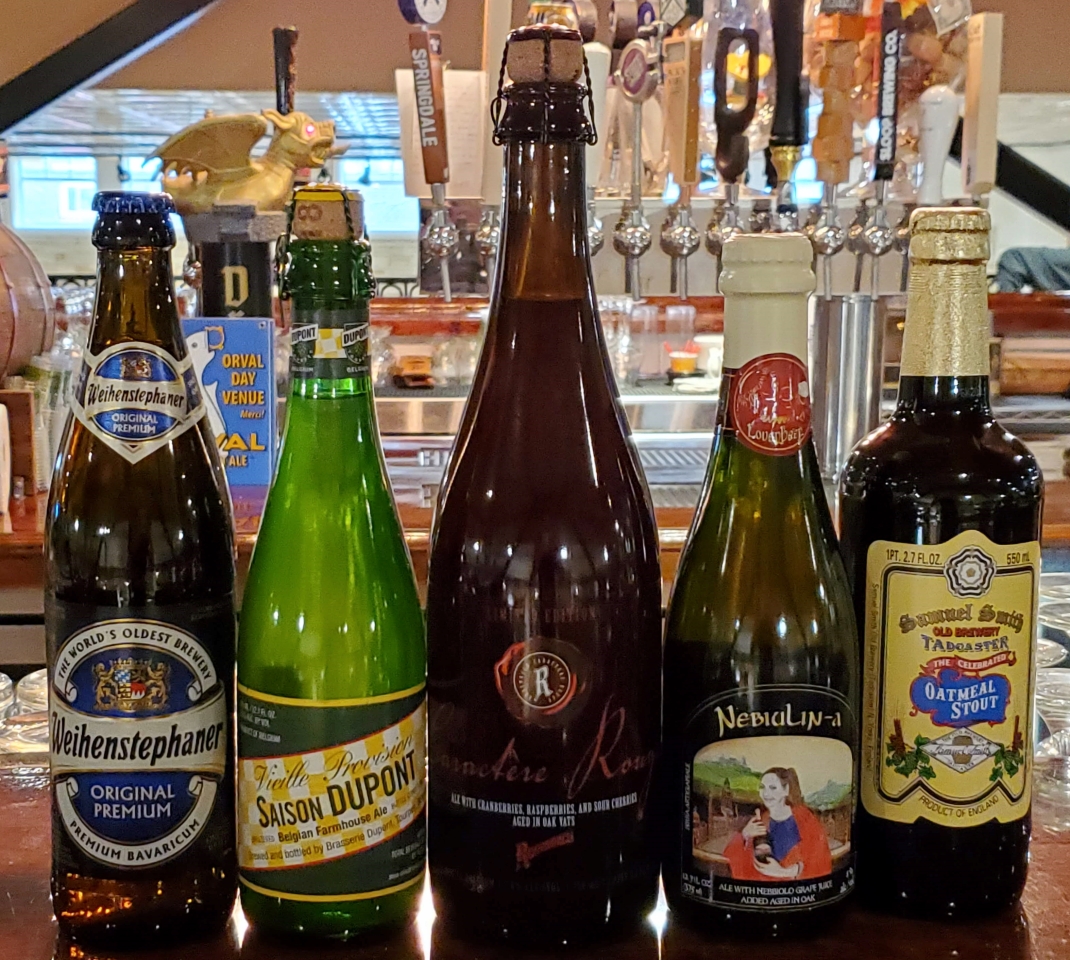 In a taste2taste tradition, which is now almost as old as the Festive Day itself (hmm…maybe not), Brendon O’Brien (DeCicco & Sons’ Grocers Craft Beer Director and “Merchant of Joy”) and I, sat down earlier this week, to have our annual parley to figure out what beer we think taste2taste’s followers might want to accompany their Turkey, or Tofurkey, this Thanksgiving

In previous years, we have checked out the US craft brewing industry with its plethora of inventiveness, wit, wildness, and wacky technique. We have introduced you to a bunch of amazing ciders from across the States. One year, we alerted you to possibly the most expensive beer your Dollars could buy and last year, we found some wonderful brews from our own back yard, here in New York

However, this year, we both felt that it was time for us to get back to basics. After all, what is Thanksgiving all about? It seems to us that one of the its main themes is about migration to this great country. Sitting down together and sharing a great meal, bringing your own cultural food and drink to the festival, mixing it up with the local vitals and beverages when giving your thanks for the year before

So, this is what we at taste2taste like to call our ‘Beer’migration’ story. Telling the tale of some of the original brews and styles that migrants to the New World brought with them from the Old-World and which have been reinterpreted and inspired the craft brewing movement here in America 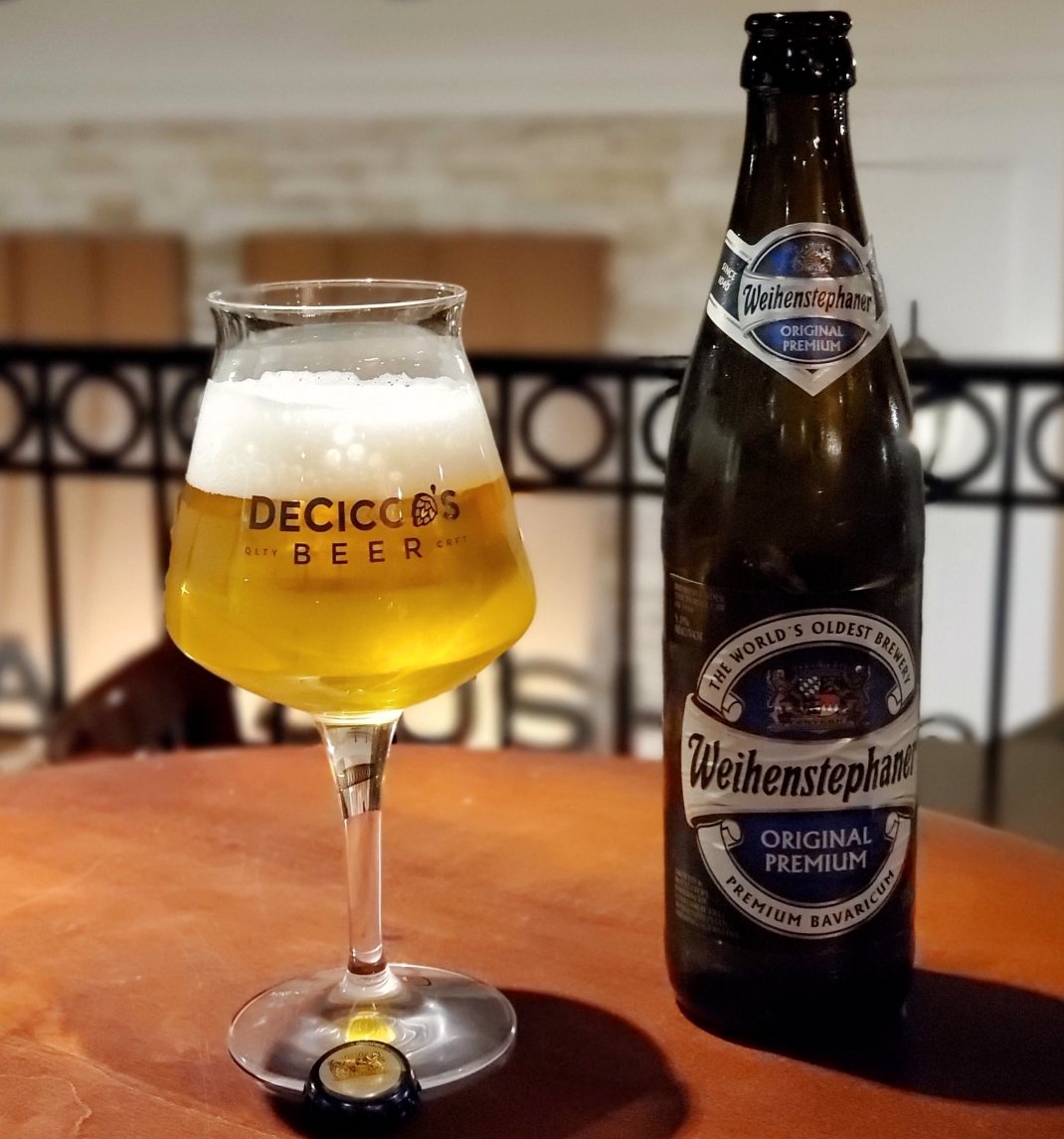 Where better can we start, both this list and the Thanksgiving Meal, than with this fantastic offering from the Weihenstephaner brewery based on Weihenstephan Hill, which is both the oldest brewery on the Planet (dating back to 1040) and located in the spiritual home of beer, Germany (of which, Brendon has a partial family origin)

Starting the meal with a classic beer, this crowd pleaser, “Original Premium”, is a Helles Lager with a vibrant yellow hue. On pouring from the bottle, it exudes a fantastic aroma of cereal grain, with a subtle biscuit and grain quality, which inter plays with a spicy and earthy bouquet of hops. In tasting, it is a straightforward lager, crisp thirst quenching and refreshing. Thus, making it, an ideal aperitif. Or, a beer to revisit as a light palate cleanser throughout the meal. Also, for the guest who insists on a ‘Bud’, this brew would work for them! 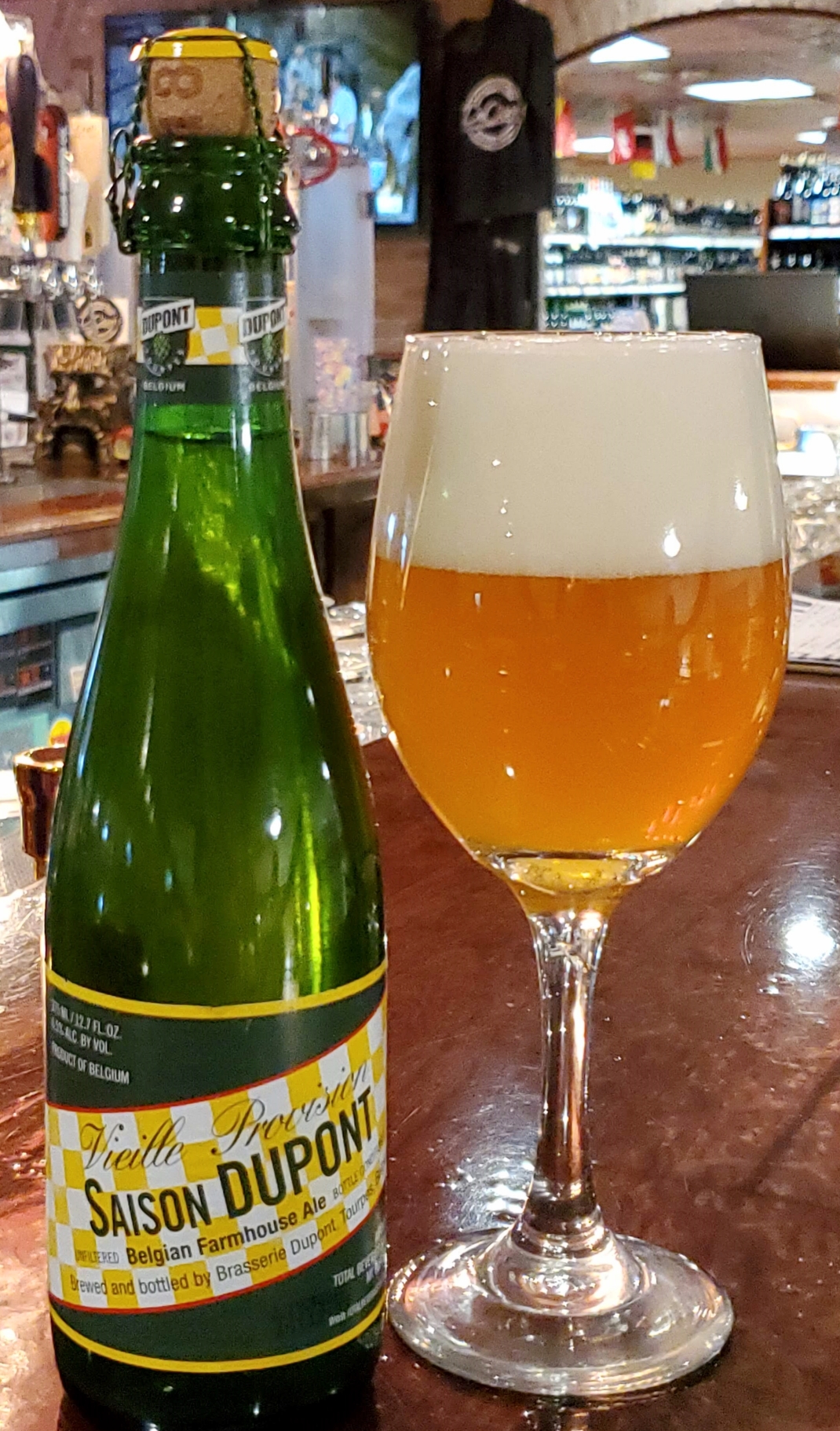 One cannot understate the importance of Belgium, (a small country in Northern Europe no bigger than the State of Maryland) on the US craft brewing industry, or indeed on the beer industry all over the world

Dupont is another historically important brewery who, more or less, saved the Saison style of beer after WWII

‘Saison’, also known as ‘Farmhouse’ style was widely used by farmers in Belgium and Northern France, to satiate their thirst during the summer months (as water was unsafe to drink). It is brewed in the winter and stored for the summer. During WWII, the German occupation led to a growth of brewing the Pilsner style of lager in Belgium (which the then German occupiers preferred), as a result of this, the traditional Saison Belgian style was almost eliminated. However, Dupont kept up the tradition and it’s current brewer, is the fourth generation of the brewing family, who are still brewing this particular Saison. ‘Saison Dupont’ is considered the Gold Standard of what a Saison should be, according to everyone who knows their beer

It is a great beer to serve with the starter course. It works well with salads, cheeses, cold meat, finger food etc. In the glass it appears straw yellow in color, with a dense rocky head and hits you with a serious rustic earthy aroma characterized with the strain of yeast Dupont employ in the beer’s production. In fact, this yeast strain is so important that many other brewers use it in their Saison production. Apparently, in the past, brewers are known to have taken the yeast floating in the sediment of ‘Dupont Saison’ bottles and re-used it in their own ‘Saison’ brewing!

The taste of this gem is simultaneously complex, very balanced and clean. It works well not just as a drink to serve with the starters but also with other courses throughout the Thanksgiving Meal. In particular, Turkey stuffing, especially when it is full of herbs, celery and spices. Celery and ‘Saison’ are a marriage made in heaven due to their earthy origins 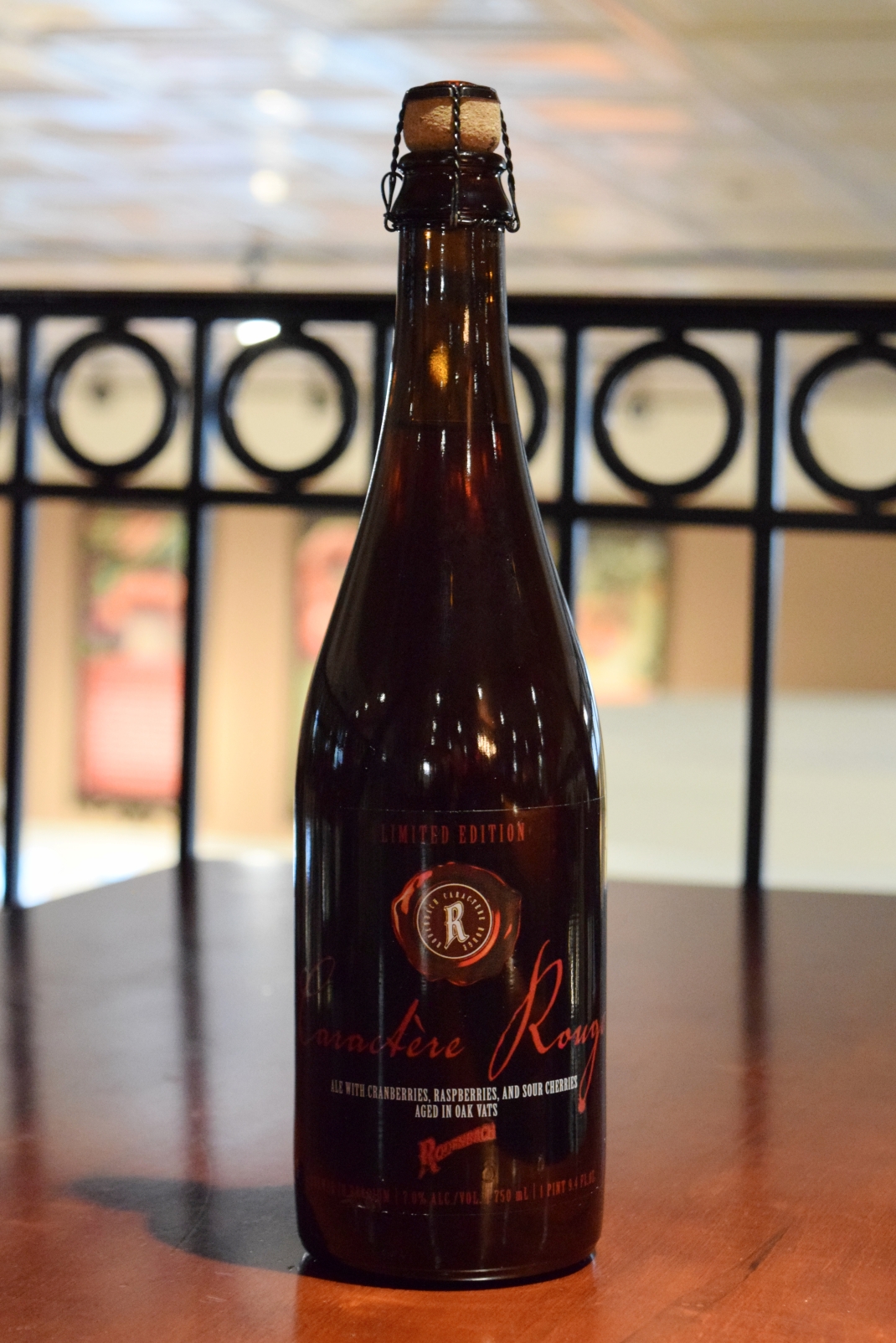 Rodenbach, a brewery established in Flanders in 1821, captures the Flemish Red Brown style in an amazing complex interplay of sweet and sour flavor like nothing else on the planet

What contributes to this, is that this style of beer that Rodenbach brew is aged only in Oak vats. This allows the sweet malt character of the base beer to pick up acidity and a wild variable from the vats. The porous nature of the wood enables the environment to have a marked impact on the beer, bringing that sour note to it

The Character Rouge we have picked, is brewed with cranberries, raspberries and sour cherries. It is perfect to reduce in one’s cranberry sauce, to serve with that Turkey. This beer to Brendon, is a perfect substitute for the Beaujolais Nouveau, that many serve with their main course at the Thanksgiving Meal. It is our recommendation as the perfect accompaniment for the Main course of the Meal

On pouring, the beer displays a vibrant red hue with brown edges. The aroma of ripe fruit leaps from the glass and a distinct aroma of berries plays on the nose. On drinking, one’s palate is met with a ripe fruitiness with a sweet malt backbone that is almost immediately followed with bright acidity. Sweet and Sour perfection. That dichotomy of flavor is, as Brendon says, truly tongue twisting!

Once again, this is a beer that you can serve with more than one course of the meal. If (in the unlikely event) there a few drops left after the Turkey is carved and consumed, you can even serve it with dessert, where it goes hand in hand with anything made of chocolate 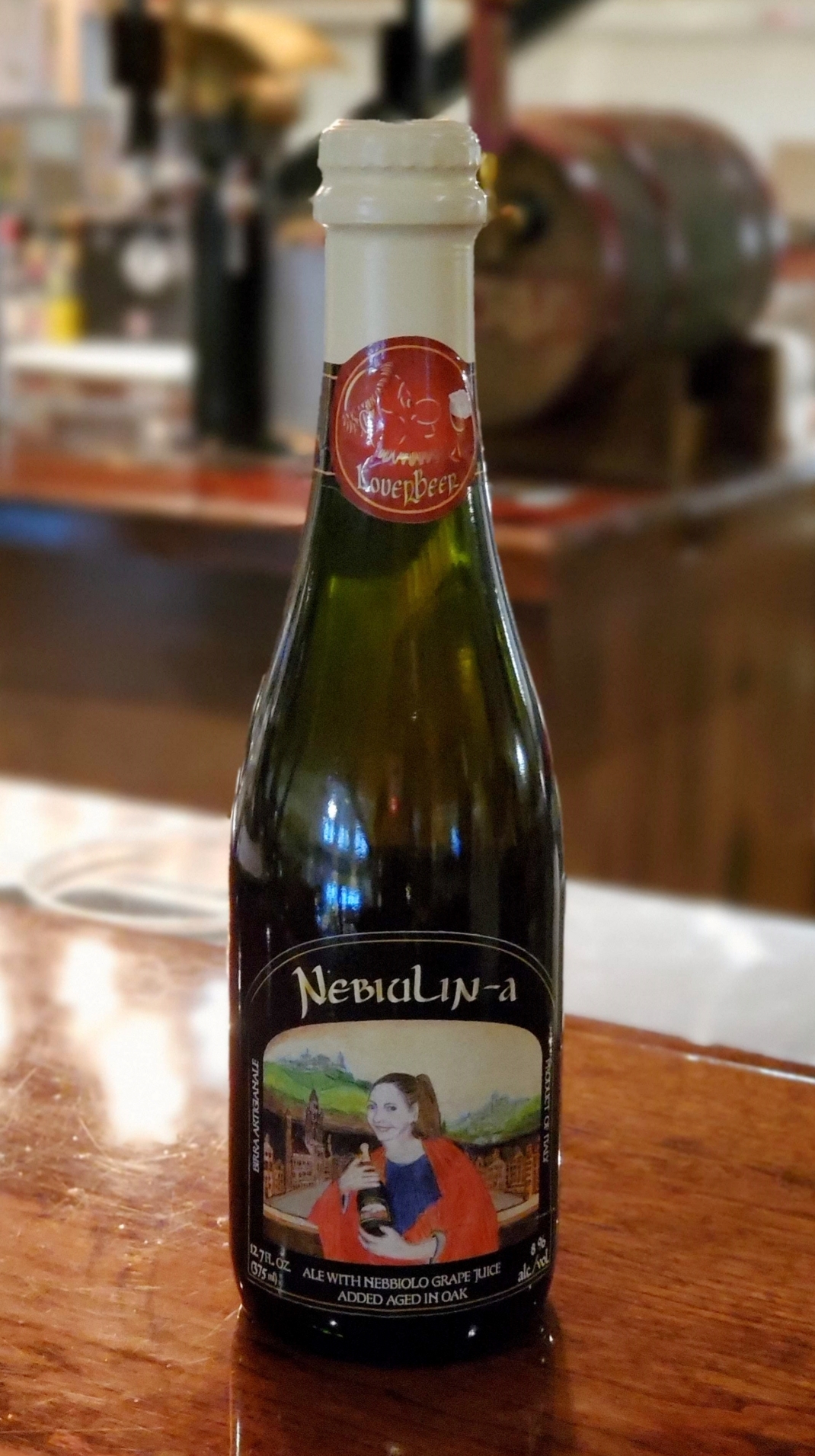 Dare we give up Brendon’s little secret? This may be his favorite small family brewery on Earth, with a husband and Wife team who are known for taking traditional techniques and partnering that with native Italian ingredients, such as fruit, herbs and spices

The beer we have chosen, ‘Nebiulin-a’, is a sour style ale aged in Oak with Nebbiolo Grape Juice. Nebbiolo is the dominant grape in Barrolo wine. Despite being a bold grape, it displays restraint and balance and this characteristic carries through in this beer. The labeling is hand drawn by Valter, whose wife, Elena appears in the picture holding a bottle of what we think is the actual beer we are talking about!

This beer, with more acidity, works well as a cleanser to slice through the fattiness of the Turkey, the heaviness of the sweet or mashed potatoes and anything else buttery being served with the Main Course. It has a unique an elegant refinement, that will please the wine lovers at the meal

Out of the bottle, ‘Nebiulin-a’ appears a shade of golden pink on the pour, the aroma is strongly reminiscent of Barolo wine, with the scent of plums, dark cherries, dates and other inky fruit. On drinking, the palate is subtle, clean and the acidity is very thirst quenching. Almost comparable to a light Rose wine

Although we think it is best to drink with your Main Course, again, it can work with other courses too, if you so desire
Samuel Smith “Oatmeal Stout”, a Stout from Tadcaster, England – 5% Vol – $4.49 (18.7oz) 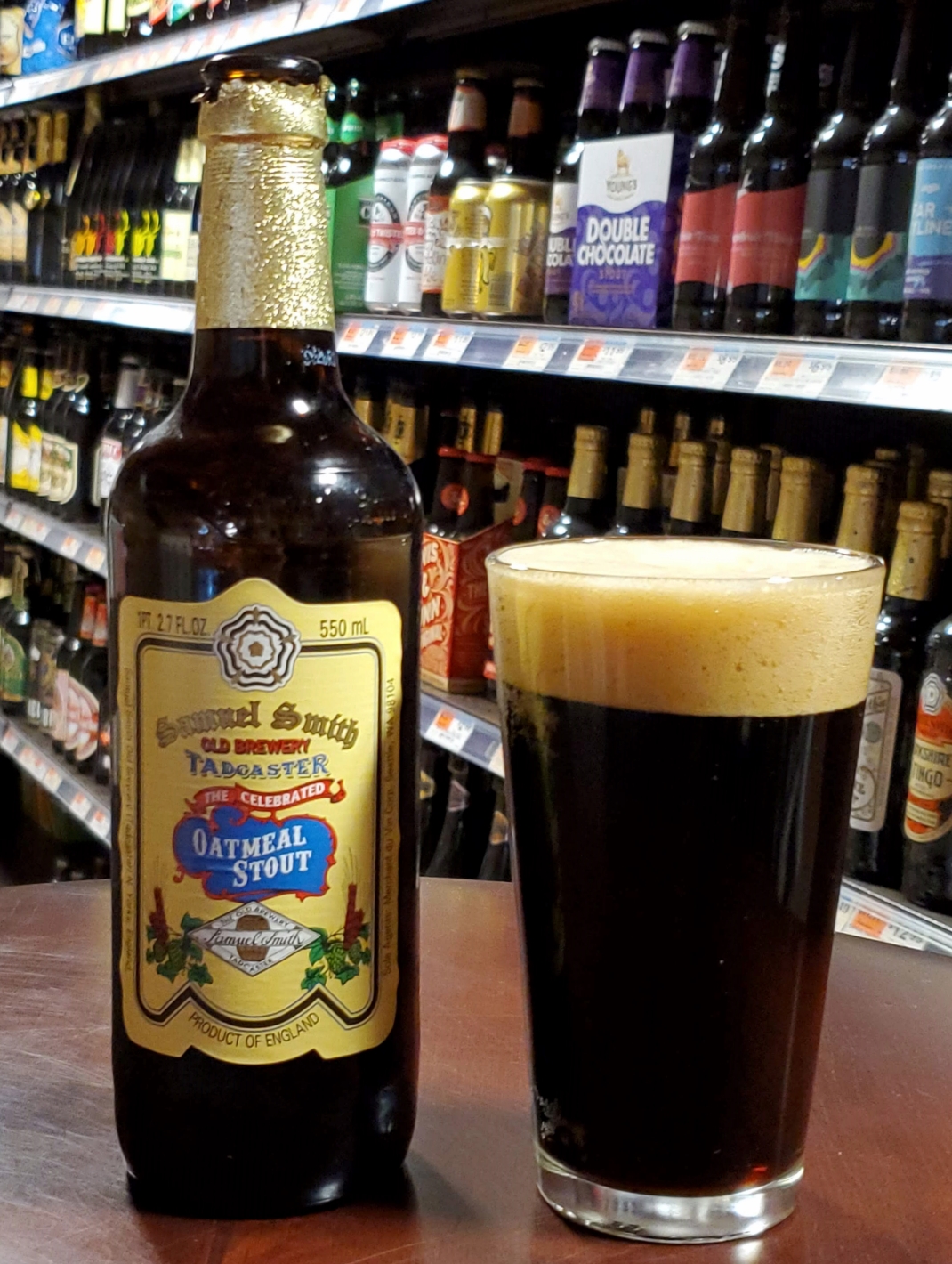 This is a beer very special to Brendon. It was one of the first beers he ever sampled and set him on his craft beer journey. According to Brendon it raised his interest and appreciation for Stout and other dark beer. When he first tried it, he was astonished by the complexity and depth of flavor and it fast became one of his favorite brews

At the time when he discovered Sam Smith’s Oatmeal Stout, adventurous beer consumers in the US were gravitating to the classic European brews, as the US craft brew market here was still in its infancy and distribution was poor. For me, as an English immigrant to the US, this beer also brings happy memories for me of University in Leeds, W. Yorkshire, England and drinking pints of Sam Smiths in pubs when on hiking trips to the wild windy cold and wet North Yorkshire Moors and Dales

Sam Smith beers, which are available in bottle form throughout the US were established in 1758 and believe it, or not, have been using the same yeast strain in their brewing since the 1800s!

This is our pick as the beer to pair with your dessert, as it displays roast coffee and dessert notes. However, it was originally promoted as a drink for nursing mothers, being described as nutritional for this purpose on early labeling! I don’t think the FDA would permit that today?

From the bottle, the beer emerges jet black in color and the head has a brown creamy appearance. The aroma has a roasted coffee bean note, getting you ready for the dessert course. On drinking it has a creamy texture in the mouth, which is provided by the oats used in the brewing. The flavor components also have a bittersweet chocolate in taste, which cling to the palate along with a hint of cocoa and caramel. This, we think, is the ultimate companion for your pumpkin pie
Final Thoughts

These Old-World beers, immigrants to the US, work well with all the stages of the Festive Meal. Unlike with the beer we have recommended in previous years, we think you can interchange each of these suggestions, with any course of your Thanksgiving Meal

These are classic heritage beers, part of both Brendon’s beer’migration journey but also very firmly on US craft brewing’s path, as contemporary brewers in the New-World embrace and reinvent the Old World Lagers, Farmhouse, Sours and Stouts for the current American audience

Happy Thanksgiving 2019 from us at taste2taste and from Brendon O’Brien and the Crew at De Ciccos!

As in past years, we invite you to vote in our survey below as to which of the beers you would most like to have on your Thanksgiving Meal

Web – Links to the Brewers Websites