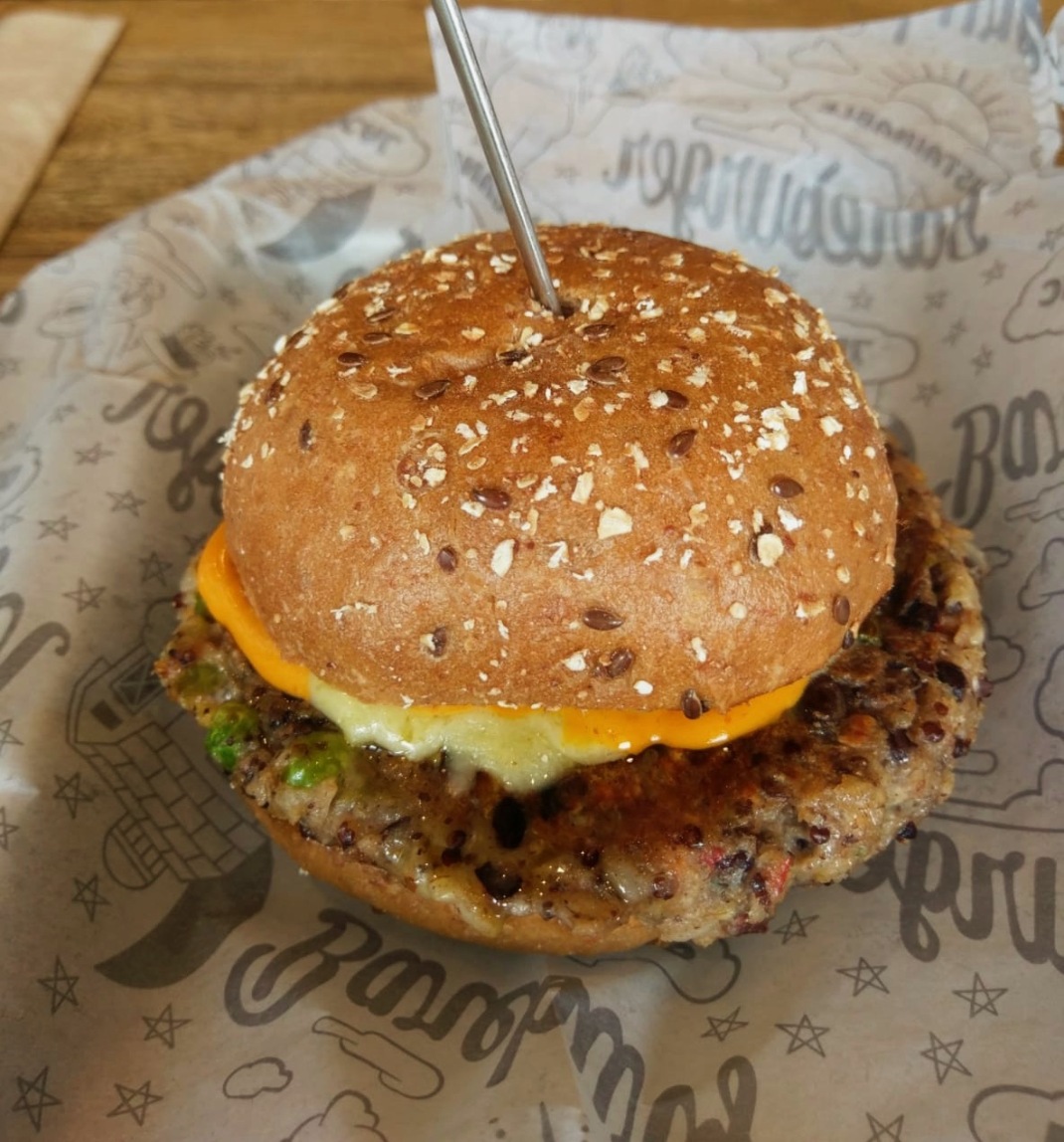 Plant-based, meat-free, gluten-free, dairy-free, vegetarian, vegan, flexitarian – so many buzzwords! It’s a changing World.  Adopting a more plant-based focused diet as a lifestyle change is a growing trend, as is the number of people giving up  meat, gluten, dairy and also adopting a vegan lifestyle. There is so much posted on Social Media  and new products to try, whether street food markets, cafes, restaurants, supermarkets and independents  in the U.S. , U.K. and globally.  We love cooking and eating vegetarian food and have made a conscious effort to cut down our meat consumption too, although not putting a label on it!

We decided to check out some plant-based burgers at Simon’s local Bareburger in New York. With so many options on the menu we thought we would keep it Classic and go with Impossible Burger, Beyond Burger and a Thai Chia:  one  of Bareburger’s in house veggie burger combos.

Lots more  in house combos or build your own burgers to choose from whether you are a vegan, vegetarian or a meat eater! It was my last meal in Westchester County, New York  before I drove back to Newark airport to fly home to London. Simon was also busy with family stuff so we made a quick decision to go with only a small number of relishes and condiments so we could focus on tasting the burger. 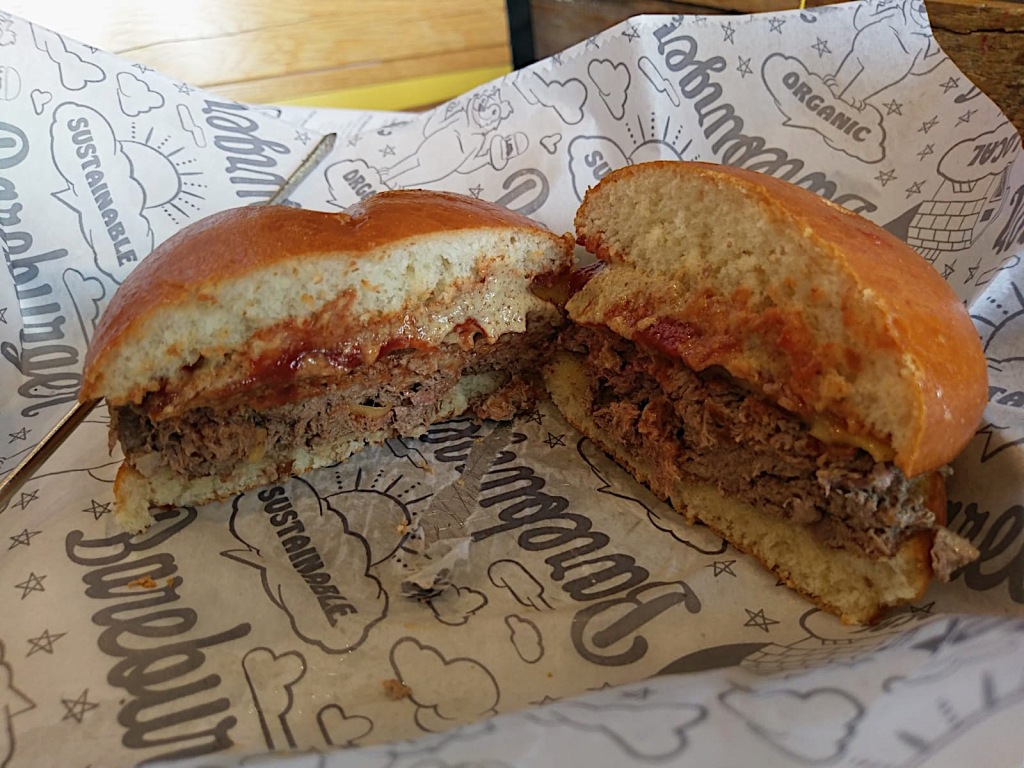 Beyond Burger with Gluten Free Bun

We cut them in half to look at the appearance before munching away for our taste2taste test!

So how did they taste? We were impressed with the flavour and textures of all three. The Thai Chia patty you could see and taste the green peas and had a slightly grainy texture from the quinoa and chia, very filling. It reminded us a bit  of the veggie burgers we ate in Vegetarian restaurants  such as  Cranks in London. We liked the layers of flavours from the Thai  spiced ketchup in particular. Both the Impossible and Beyond burger had a more meat-like texture and look. We enjoyed both. Simon said  that if he visited again with his ‘tweenage’  son, ordered an Impossible and a Beyond burger  without mentioning they weren’t made of meat , his son probably wouldn’t notice!  Simon did visit Bareburger again recently and although he did let his son in on the secret, he said that his tweenager really liked the Beyond Burger finding it quite close in taste and texture to meat and it especially worked well in vegetarian stance with American cheese, salad leaves, tomato and ketchup!

It got us thinking should a plant based meat alternative burger taste of meat ? We asked a few friends : vegan, vegetarian, flexitarian and meat eaters. We also polled our Yotam Ottolenghi Housewives FB Group foodie friends. There were lots of different views. Friends who were vegetarian/vegan because they didn’t like the taste of meat were clearly not fans, preferring something like a Portobello mushroom ‘burger’. Some non meat eaters both vegetarian and vegan, who did miss the taste of meat would consider eating on occasion. Our YO Foodie friends who  love cooking lots of different cuisines and are fans of both plant  and meat based recipes were mostly in favour of veggie burgers tasting of veggies, although one or two non meat eaters  would consider eating.  My local running shop manager, an ethical vegan for many years  said it’s not something he would personally choose to eat. However if it was a vehicle for people to enjoy, that involved less animals being killed he supported the principle. Another neighbour of Simon’s also a vegan and a food entrepreneur again thought an interesting innovation, preferring Beyond Burger,  as a lighter texture, not leaving him with that ‘carb heavy’ feeling after eating. Although he wouldn’t personally choose to eat something with the appearance flavour &  texture of meat he pointed out that Beyond Burger is marketed towards meat eaters wanting to eat less meat, more plant based meals. Simon also bought a pack of Beyond Burger patties to cook at home.

Beyond Burgers bought to cook at home 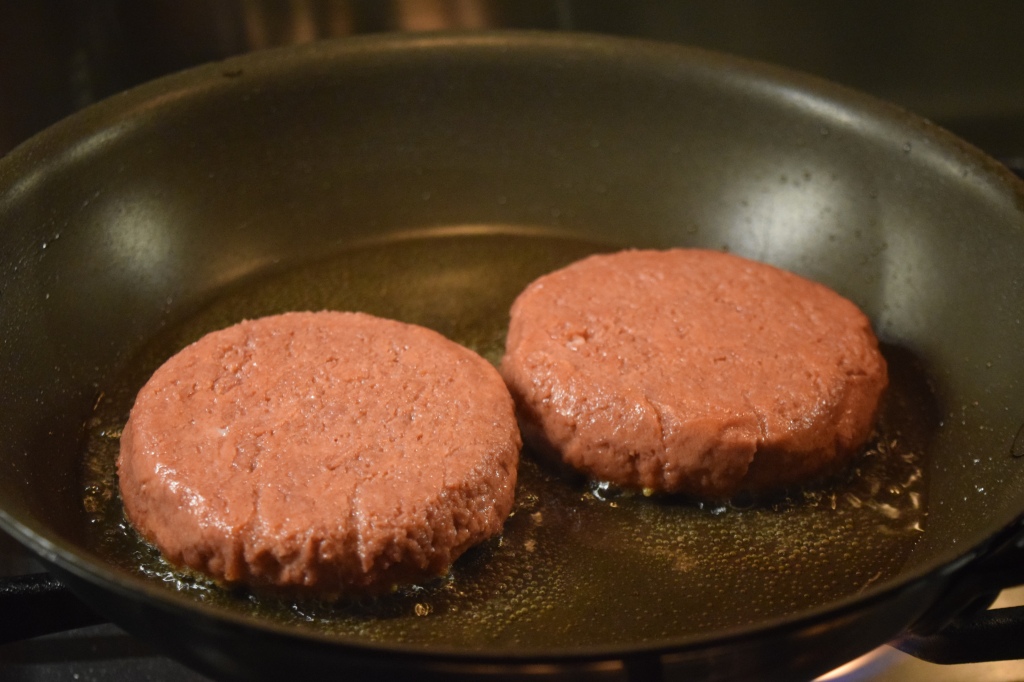 Beyond Burger skillet cooked at home 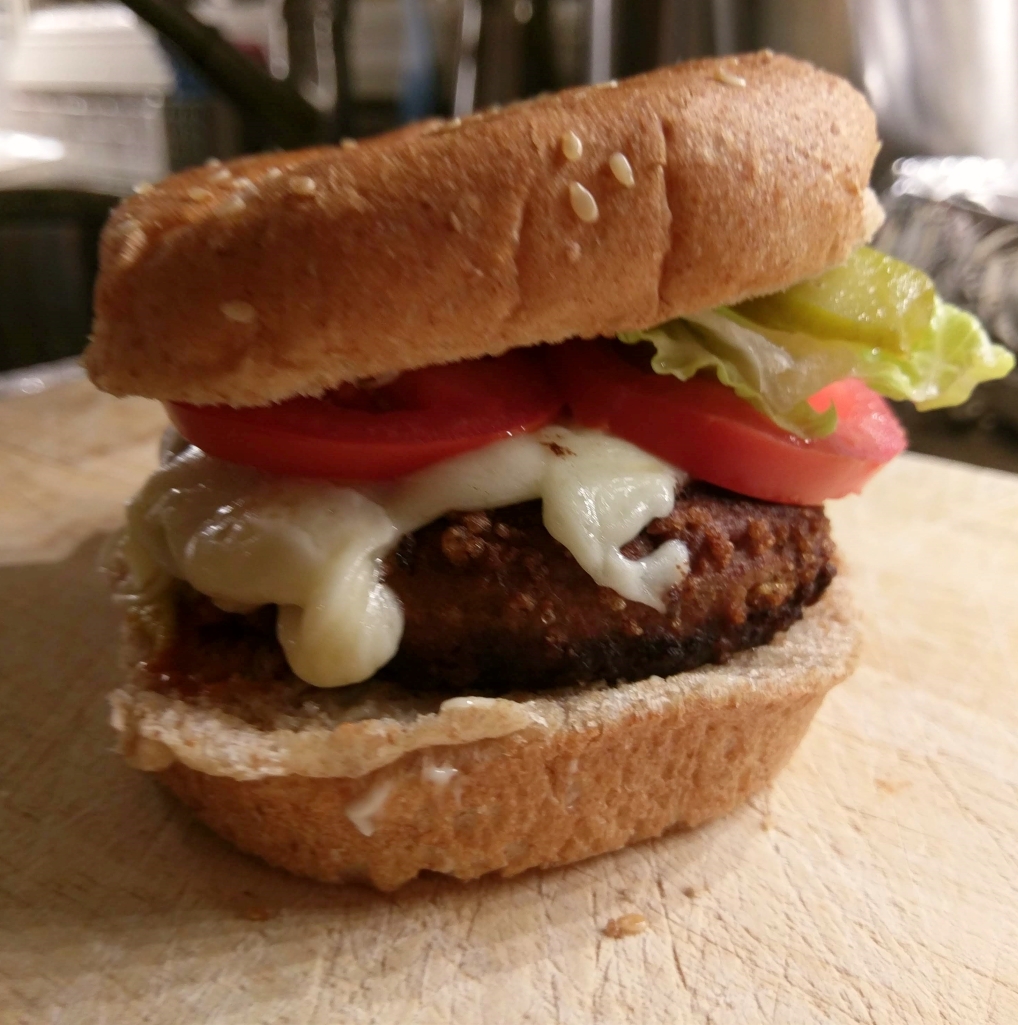 So we enjoyed doing this taste test and enjoyed all three options however felt the Impossible burger just edged it on overall flavour, texture and eating experience. The Beyond  Burger is also widely available to buy  in U.S. to cook at home, and in U.K. too in Tesco’s Supermarkets and at Honest Burger Chain.