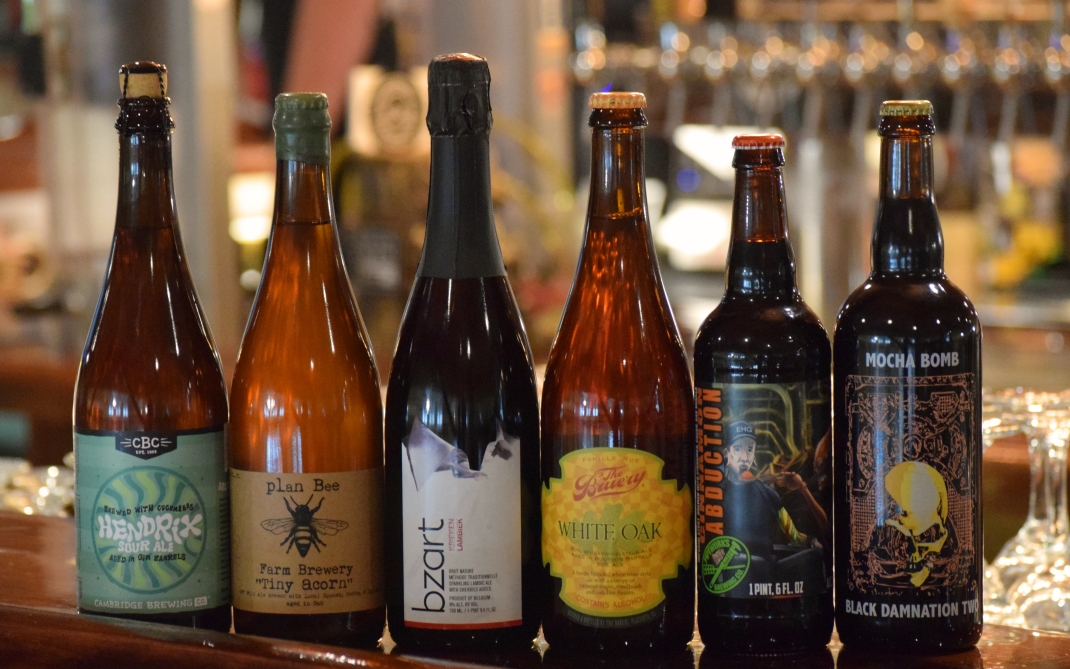 This Thursday, as a newly minted US Citizen, I will join my fellow Americans in celebrating the unique US festival of Thanksgiving

For those of our readers who have never been in the USA on the last Thursday in November, this week generally involves everyone (attempting to) travel vast distances to visit their family. Then, on arrival (if they made it) over indulging in a multi course festive meal. It’s traditional to eat a monster size turkey (for which Lindsey has just posted a recipe on taste2taste) drowned in cranberry sauce and then to crown the dinner with huge slices of sweet Potato, Pumpkin and Pecan Pies. This all must be washed down with a gallon or two of wine (or so guides to New England suggest)

We feel the craft brew industry is now so sophisticated in the US and beyond that you need no longer turn to the fruit of the grape for your Thanksgiving drinks as the fruit of the hop will do just as nicely!

To prove the point, last week, I sat down with my good friend, Brendon O’Brien, the Beer Guru at DeCicco & Sons in Armonk, NY, to discuss 6 of the best beers one’s hard earned dollars can buy. These brews are so fine, complex, subtle in flavor and nose, we think they would easily grace one’s Thanksgiving table in place of your regular go to festive wine 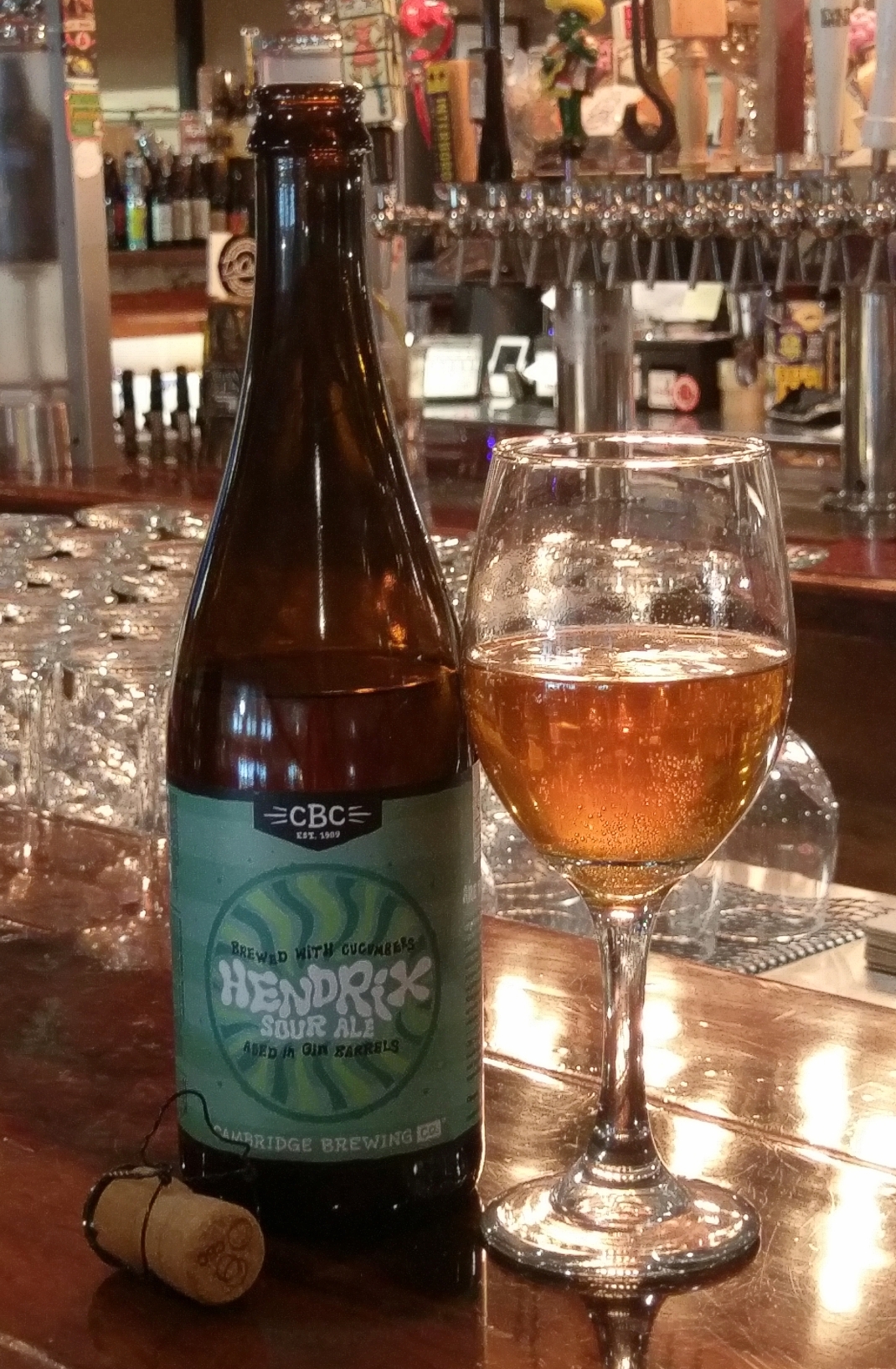 Cambridge brewery was an early player in the East Coast, New England beer industry founded in 1989 with the aim to have a lot of fun with creating interesting beers with names and aesthetics to match

Hendrix Sour, named after Brendon’s hero, the famous Jimi Hendrix of course, is a sour ale with a high acidity.  The ale it is dosed with cucumbers and then aged in used Gin barrels (perhaps Hendricks Gin? That’s a trade secret however)

On pouring it is light in color. The taste is very refreshing and cleansing. There are strong hints in its flavor of floral rose petal, citrus, juniper and of course cucumber too

This beer is what I would call the true trend master, as cucumbers and gin have been trendy throughout the past year

Brendon believes it’s the perfect aperitif to be served at your Thanksgiving Meal strongly mimicking a cocktail like a Gin & Tonic, as it’s tart flavor works in perfect synergy with canapes and finger food. It is a great beer to welcome your guests to Thanksgiving and to revive them after their travels

From tiny acorns, great big oak trees grow. Our next beer is a tour de force straight from the New York countryside and comes with an interesting story.

Evan Watson, the talented brewer of this fabulous beer is also a touring musician from the Television talent show ‘The Voice’ who toured with Meatloaf. Around 5 years ago he set up his own brewery in the Hudson Valley growing most of the ingredients on his farm and locally sourced the rest. What’s more, the yeast strain of all his brews is derived from Honey harvested from his own apiary.  Evan’s Plan Bee is the kind of brewery that loves making beer as a labor of love and this is shown in the beer we have selected

The plain manila labeling on Plan Bee’s Tiny Acorn brown beer bottle with it’s wax seal stamped with an image of a bee are all about the farm. Down to earth. However, don’t be fooled, Tiny Acorn is a splendid adaptable drink for your festive meal. Like Thanksgiving, which was historically the celebration of the harvest in the US, this beer is all about the fruit of the harvest

In style it is a farmhouse ale (Plan Bee call it a ‘Wild Ale’) with a rustic earthy flavor with a nice bright acidity – lively but not too heavy. The dominant flavors derive from coriander, lemongrass, local acorn squash. The coriander and the lemongrass give it a citrus quality making it refreshing and this in turn will make your thanksgiving meal come alive. Meanwhile, the local squash, adds a texture and weight that reinforce that rustic earthy quality

We recommend this wonderful beer to start your meal but it is so versatile in its flavor and weight that Brendon is convinced it will see you through your whole meal. In his opinion it is simply perfection as an accompaniment with Turkey and stuffing and worth every cent at around $16 a bottle 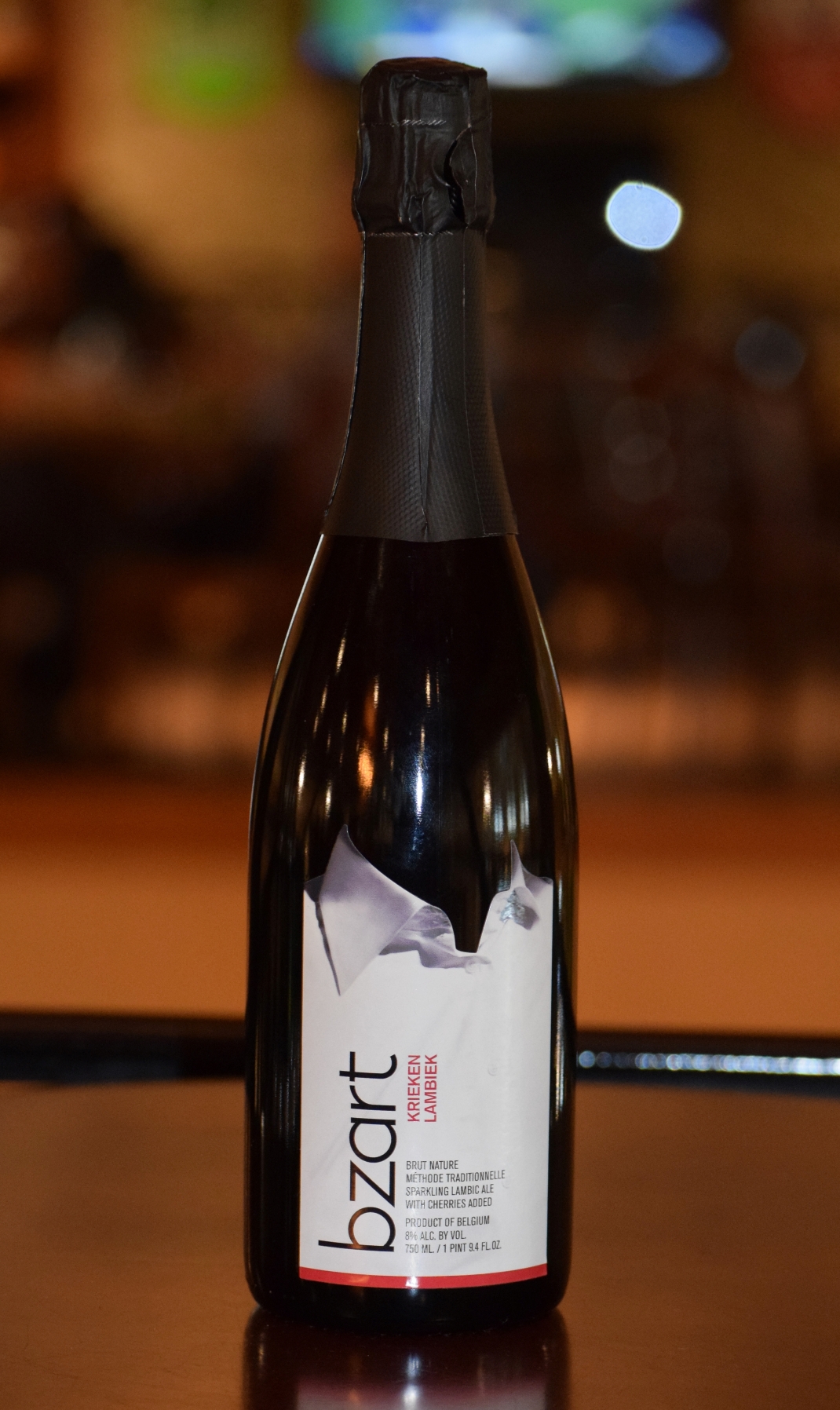 Every list of beers for Thanksgiving must contain something truly out of this world and this exceptional offering from Belgium fulfills its remit in our selection and to let you into a secret, it’s also Brendon’s pick of the bunch

According to Brendon, Oud Beersel – bzart are a traditional brewer dating back to the 19th Century but with a modern twist in their style. Their Kreiken Lambic, which we highly recommend is a lambic base blended with kreiken, (cherry beer) in an elegant champagne style bottle dressed with a label of a  crisp white open neck shirt, foil wrapped with a cage and cork like champagne

You might ask, why choose a Belgian cherry beer and not your go to wine for Thanksgiving? Well, in the USA one of the wines of choice for Thanksgiving is Beaujolais Nouveau, a young unstructured fruity clumsy wine. Like fruit juice it will successfully accompany your Thanksgiving food for the festival BUT why not drink something truly exceptional? bZart’s Kreiken Lambic is the antithesis. Round and decadent, it retains those saturated fruit flavors but instead of the clumsiness inherent in Beaujolais, it has near perfect structure and finesse. It is the connoisseurs’ beer

In flavor and texture it’s like a cross between the best of Champagne and Cherry Pie all mixed together in a glass, sweet round fruit with a lively acidity, balance with a refreshing carbonation. It is beautiful to consume with every stage of your festive meal, but if there is anything it goes with to perfection is accompanying your fresh cranberry sauce. The ultimate Thanksgiving side

To put it very simply this is an outstanding drink. So perfect it is a true wine replacement and at the very sharp edge of high end beer. Naturally there’s a price to pay for all this goodness. A somewhat steep circa $62 a bottle. However, worth every Dollar or Euro!

‘White Oak’ by The Bruery

When we first ventured into investigating beers for Thanksgiving a couple of years ago, we voted it’s Autumn Maple brew as perhaps the perfect beer for the festive meal. This year we selected their ‘White Oak’ named after the barrels it’s partially aged in

This inventive brewery is the brainchild of Patrick Rue, who has the knack for brewing heavily flavored beers with a beautiful balance. Bold in flavor multi-faceted and excellent barrel aged brews. According to Brendon, The Bruery is one of the few breweries creating high alcohol heavy beers that really work, it’s a testament to Patrick Rue that he makes such quaff-able brews with extreme complexity that remain drinkable at such strength

White Oak with it’s 12.5% volume is a ‘wheat wine’ based strong ale, half of which is aged in bourbon barrels. In color it is pale golden amber due to its sojourn in those whiskey barrels. Due to it’s creamy heaviness there is less carbonation apparent

In tasting one gets luscious whiskey, coconut and vanilla flavors with an accompanying syrupy viscosity. It is notably creamy on the tongue (a side effect from the wheat according to Brendon)

Though I find the Belgian offerings impressive, it’s this beer that I chose for my Thanksgiving Meal. Totally reasonable at around $17 a bottle

On picking up the bottle I was amazed to see one of the most wacky labeling themes I’ve yet to experience in my forays into US craft brewing. Pipeworks artwork for this brew is totally Sci Fi. A cartoon of an Alien stuffing a human with a spoon of cinnamon aka in the style of the Cinnamon challenge!

On pouring it is jet black in color as one would expect, as the base is an Imperial Stout brewed with cinnamon, cocoa nibs and vanilla

In taste it has a strong chocolate theme in its flavor working with the cinnamon and a syrupy quality slightly thick on the tongue. All of which combine well with Thanksgiving food

Brendon recommends Cinnamon Abduction be served as the gap bridge between dinner and dessert, as the cinnamon and marshmallow hints in the beer marry immaculately with both turkey, gravy and sweet potato pie (candied yams) and serves well as the guide onward to dessert!

As one’s Thanksgiving meal moves onto dessert, we think this spin on a classic Belgian brew from the highly regarded Belgian brewery,  DeStruise is the perfect drink

DeStruise claim to fame is a beer called ‘Black Albert,’ a rich viscose Imperial Stout. Mocha Bomb Black Damnation Two is what Brendon calls their challenge to add something new to Black Albert.  To create this awesome brew, De Struise partnered with De Molen of The Netherlands, another historic brewery

DeStruise and De Molen  took half the beer and allowed it to mature with whole coffee beans from a craft plantation in Columbia. The other half is a combination of a two other stouts aged in whisky barrels. Thus, a blend not quite from hell of three beers in one

In taste it is dominated by coffee roast, chocolate and nuts with a hint of licorice. Super rich and heavy jet black in color

What I would call the tasty Dr Frankenstein of the beer world at a rather interesting $50 a bottle, if you care to make it your Thanksgiving treat. We certainly would as it’s a shot of espresso in beer form to end your Thanksgiving meal. A truly epic dessert beer!

Happy Thanksgiving, beer drinking and Turkey chomping to all our readers in the USA and beyond

Do you agree with Brendon and our favorites, bZart’s Kreiken Lambic and White Oak? Why not have your say in our Thanksgiving Poll below or let us know on instagram or twitter @taste2taste

The Weblinks to the Brewers