While my co-blogger Lindsey was in town last week, I thought it might be fun to show her just how awesome it is to live in NY, during the great renaissance of US craft brewing

I managed to persuade my good friend, Brendon O’Brien at DeCiccos to introduce us to one of his favorite local brewers, Jeff O’Neil, the founder and owner of Industrial Arts Brewing Company, whose product, Brendon, rates very highly 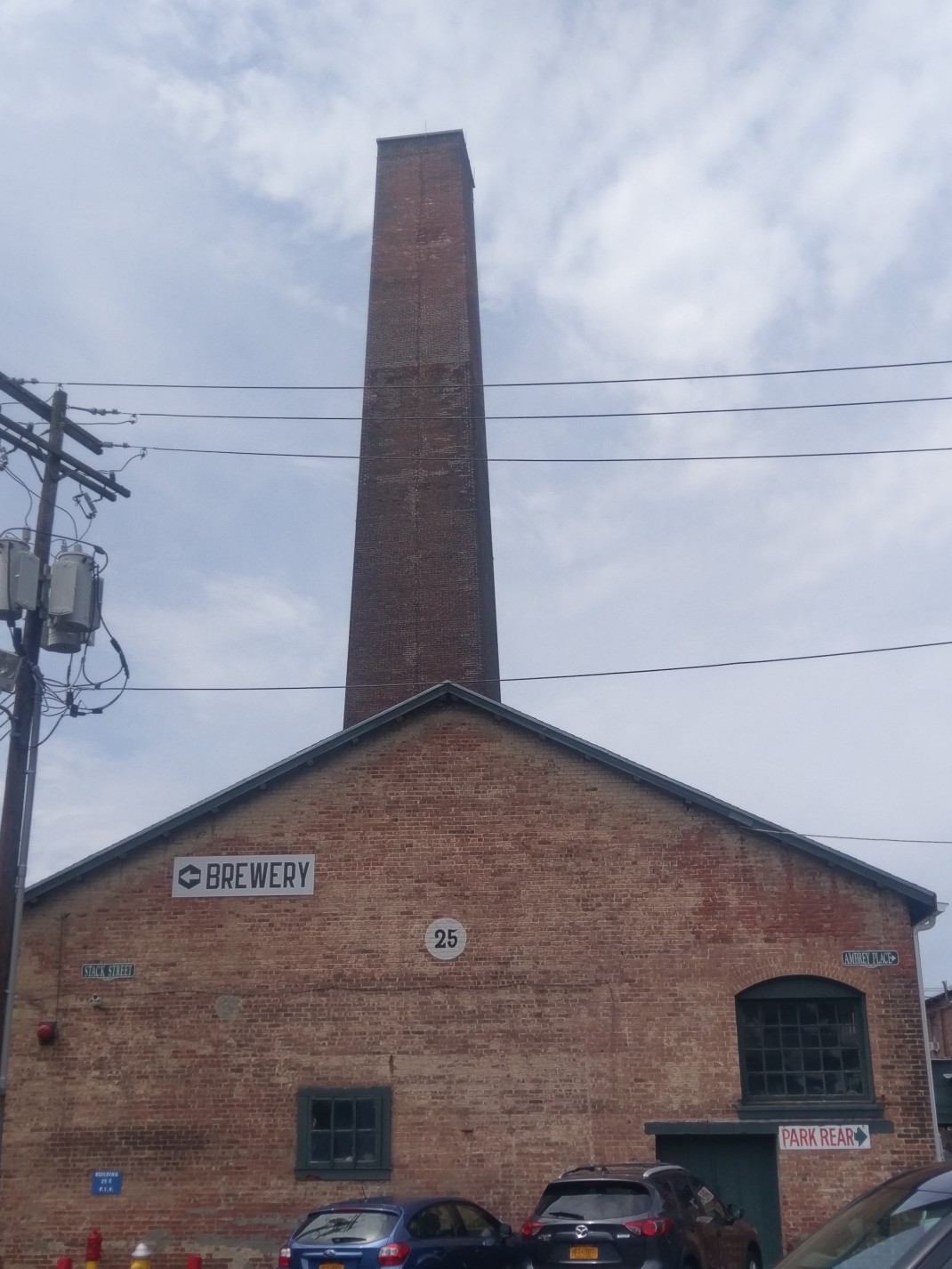 This way to the Brewery!

So, one sultry summer morning, Lindsey and I took a ride over the Tappanzee Bridge, across the mighty Hudson River into the wilds of Rockland County, NY to pay a visit to the historical Garnerville Arts and Industrial Center in West Haverstraw, NY

After a few minutes wandering about, admiring the setting with it’s tumbled down industrial buildings, canals and weirs, we located Jeff in the Industrial Arts factory complex, full of kegs of his beer interspersed with art workshops

Artwork between the old Industrial Buildings

We immediately got down to the important business of discussing beer

Making ourselves comfortable in the hexagonal tiled bar and brewing room at the heart of an old factory building with its cool industrial vibe, shiny pipes and miscellaneous brewing equipment, we started speaking with Jeff about how he ended up founding Industrial Arts Brewing Company

We discovered that Jeff’s personal beer journey actually started on the other side of the US, in the California home of the US craft brewing industry way back in the 1990’s. There, he worked at Gordon, Drakes, and Jupiter Brewing Companies. However a few years back, when his girlfriend got a place at Graduate School in Cornell University, he upped sticks and, luckily for us New Yorkers, moved East. Here, in NY, he became the Head brewer at local stalwarts, Ithaca and Peekskill.

Having ‘sowed his wild hops’ in craft brewing and played with the wild and wacky ingredients and trends over the years, Jeff had the idea of brewing his own beers but with the aim of producing what he describes as brew classics. His approach was to cut out the extremes he had seen in his years of experimentation and to focus on a back to basics purist approach in his own beers

He obtained backing and a suitable location and founded Industrial Arts in the old Garnerville garment factory, which supplied the Yankees Uniforms during the American Civil War. Here, Jeff set to work putting his purist ideas into practice coming up with some instant classics

Jeff’s brews were initially only available on tap but recently, he has set up a canning operation in an adjoining building, which (of course) we had to check out. Having watched some of the ‘Industrial Art’ in motion in the canning process, we  spent a few chilling minutes in what we guess is one of Rockland County NY’s largest Beer Coolers, we kid you not! The place is a beer drinkers idea of refrigeration nirvana! 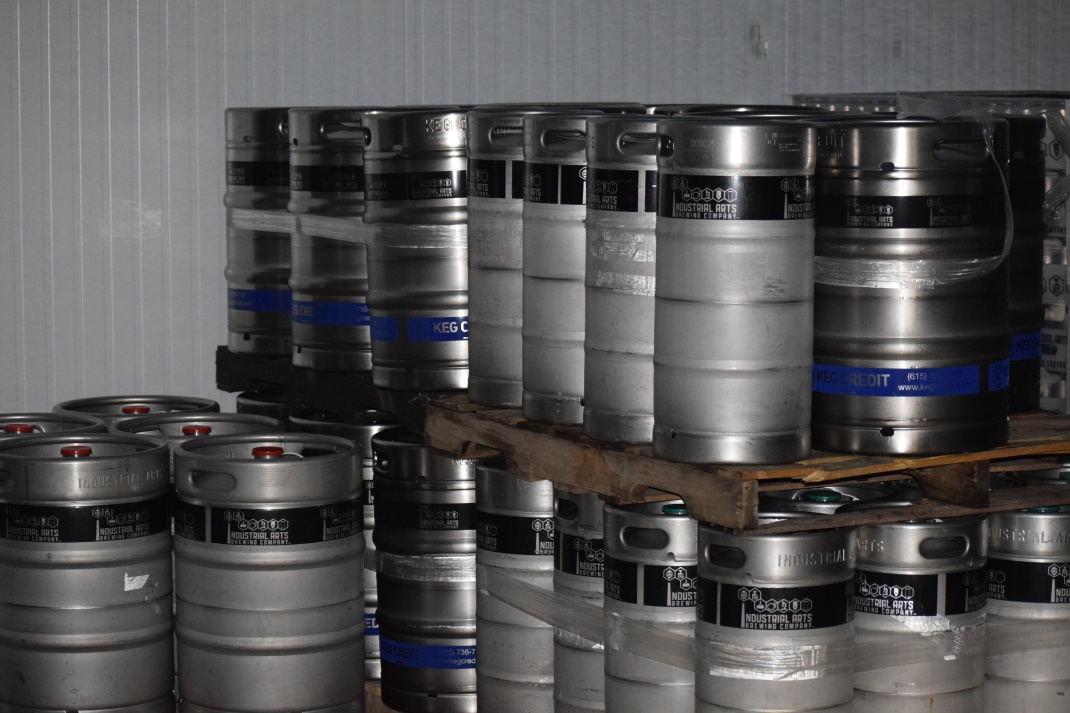 Kegs in the Monster Chiller at Industrial Arts

We then moseyed back to the Brewery Tap Room in order to check out some of Jeff’s excellent brews. The names chosen for his beer reflect his approach to beer making. We also felt they fitted in nicely with the setting in which they had been brewed

A true no nonsense smooth, clean and pure drink perfect for a hot day in NY 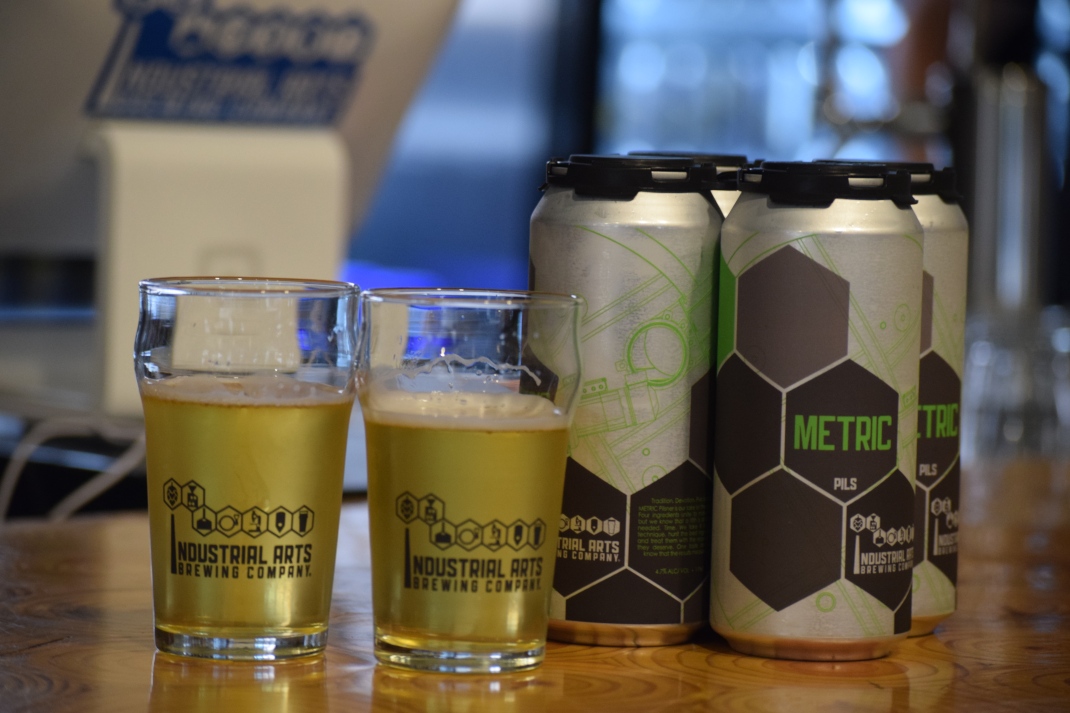 We then quaffed this fascinating brew with it’s delicate fruity, hoppy nose, soft taste and clean fermented character. According to Jeff, it’s his interpretation of a clean and classic American hoppy beer and we loved it!

State of the Art

State of the Art – IPA perfection

We then tried Jeff’s ‘seasonal’ IPA that rotates, chameleon like, every 6 to 12 weeks, or so

This bevvy,  in the form we tried, State of the Art 138 is a great rendition of what a Summer beer should be. Hoppy, rounded, smooth and complex. Fruit candy and Starburst in the taste with a little watermelon too. Absolutely delicious!

Pour me another Jeff!

Check out http://www.industrialartsbrewing.com for more information on  the brews.  Or, for those of you local enough who’d like to try Jeff’s fantastic beer in the draft, just mosey on down to Industrial Art’s Brewery Bar in Garnerville which is open to the Public 5 days a week and for my fellow denizens of Westchester County, our friends at DeCiccos have the canned product in store, see https://www.deciccoandsons.com/ontap/