I love the build up to the Christmas holidays – all the anticipation & preparation. It’s our family tradition  that I host Christmas lunch as I get to cook something special  and someone else takes charge of clearing up!  I decided to take advantage of having a few days to explore San Francisco & surrounding area and set myself a challenge to buy some red wine from Napa & Sonoma for the special day. I consulted my foodie colleagues who came up with a fab food bloggers itinerary  –  thanks to Lauren, Elisa, Gregory, John & The Fatted Calf Napa team for the following picks. The challenge: 5 hours, 5 vineyards – Napa & Sonoma plus some foodie hotspots – & back to San Francisco in time for dinner – could I do it? Have I taken on more than I can chew or slurp?

I set off early driving through the morning mist, sat nav set aiming for breakfast at Oxbow Market, Napa, at the Model Bakery where Gregory suggested I try their version of an English Muffin.

Whilst it was being prepared I couldn’t resist having a quick chat with the baker behind the counter who was busy  preparing the sourdough.

A few minutes later I was tucking into my Breakfast Muffin which was quite different – softer, fluffier and less chewy than our English version! Together with a great cappuccino I was ready to go, but not before having a quick saunter around Oxbow market. An amazing emporium filled with artisan suppliers & cafes selling sustainable, locally grown and produced food from Napa and the surrounding areas – a must for any foodie  and food blogger. 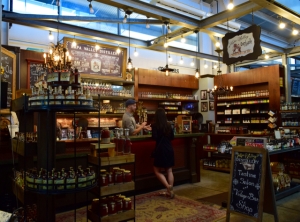 Tiki Tim in the tasting groove!

I got chatting with Tiki Tim from the Napa Valley Distillery after tasting a couple  of their home-made shrubs. Shrubs are a growing trend (see previous post for explanation) with more being used in the London cocktail scene. Tim gave me a great insight into the cocktail culture of California including the origin of the Mai Tai first created at Trader Vics. Apparently to protect the secret recipe the bottles had no names, only  numbers and were prepared by the barmen in the kitchen away from the prying eyes of potential rivals. I would love to have stayed longer and hope to go back and spend some more time tasting and learning about cocktails & tiki culture.

I also popped into The Fatted Calf to take a few photos of their amazing charcuterie & deli range. After the usual food blogger intro: “is it ok to take some photos?” I got chatting and explained my challenge – where better to get a top tip than from a butcher on what to pair with the meat or turkey on 25th. Plan adjusted, I headed off to Vineyard 1: Robert Sinskey on the Silverado Trail.

The weather was spectacular – clear blue sky with  the sun highlighting  the vine leaves that were changing colour  – a spectrum of yellow & orange hues  with tinges of red- stunning.  I went inside to be greeted by Tiffany, one of the wine tasting team who on hearing my British accent, began to recount her recent trip to the UK. I explained as I was driving I was going to have to use the swirl, sniff, slurp & spit method to taste.

After trying the Los Carneros Pinot Noir (lush cranberry, cherry & raspberry fruits with hint of baking spice, orange zest & tea) I opted for something weightier – the Cabernet Franc Vandal Vineyard, Los Carneros Napa 2012 (35 barrels produced). A complex wine with aromas & flavours of mulberries, blueberries with leather & peat.  I’m beginning to sound a bit like Olly Smith, the enthusiastic UK wine expert with his colourful descriptions  or an actor from the movie ‘Sideways’!

Along with the bottle of Cabernet Franc, Tiffany gave me a brochure with lots of great recipes to try. I vowed to come back with a designated driver and do a proper wine tasting but the clock was ticking.  So on to Vineyard 2 – Elizabeth Spencer Winery in Rutherford – another pick from The Fatted Calf team. I was running behind schedule so this was going to have to be a quick visit. I walked past the row of Meyer lemon trees into the beautifully designed courtyard &  tasting area. Challenge explained to the helpful  Geremy, their wine educator, I decided to focus on Cabernet Sauvignon. After trying two opted for the Proprietor Selected Calistoga Napa Valley 2014 (10 barrels produced). This really was speed wine tasting/buying in action and after munching on a home-made breadstick between slurps, and bottle bought I was ready for Vineyard 3  – which really was on a whole other level of  challenge – could I actually get in! John recommended Staglin Family Vineyard, Rutherford having visited & cooked there many times. I had emailed them a few days before explaining I was in Napa for just 1 day. John’s other suggestion, William Seylem, had been ruled out after having joined their mailing list, I got the return response stating   “thank you for your interest –  our next release will be available in 5- 9 months” So maybe OK for Christmas 2017, if I am lucky.

I drove down the aptly named Bella Oaks Lane between the vineyards and reached a large locked gate. I tried the intercom, pressing every button in turn, with no answer. I nearly considered giving up  but thought I will give it one last try to call the office number. Cindy answered and I explained: food blogger from UK, 5 hours in Napa, highly recommended by a San Francisco chef. I was happy to just buy on spec, as it was becoming apparent that a tasting was not going to be possible. To my surprise, she let me in, with some serious powers of persuasion employed. A spectacular setting appeared as I drove through the vineyards up to the house. As I entered the tastefully decorated lobby, with a beautiful baby grand piano there were  lots of famous faces in a photo gallery of America’s Who’s Who adorning the walls. I  found an office and asked for Cindy, to be asked if she was expecting me. ” “Yes” I answered.

I was escorted to another building to meet Cindy who then introduced me to my escort Jaime (client coordinator )  who took me back to the tasting house to  show me the list so I could pick a bottle to buy. I mentioned I had emailed them, and Jaime politely explained they usually require several weeks notice to book a wine tasting. Wine picked, credit card supplied,

I wandered into the tasting room drawn in  by the most magnificent view. I then spied a picture of the Obamas who had hosted an evening with wine supplied by Staglin and  a photo of Tony Blair (ex British Prime Minister ) who had also been a visitor.

I wandered back thinking this was taking rather a long time to find my payment had been declined! This was one of those moments when you just want the ground to swallow you up. I explained I have a bank that are so hot on security they may have blocked my card (they had!). Another card deployed and Jaime was  diplomatic,  a really understanding & gracious host . Business cards exchanged he said  I would be more than welcome back and to bring along the chef  who recommended Staglin.  I made a swift exit and headed for Duckhorn Vineyards, St Helena – Lauren’s recommendation. 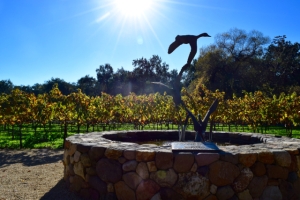 The temperature was sizzling at 29 C (84 F) so I was pleased to get out and walk through the gardens –  with its immaculate layout showcasing the vineyards in all their glory. I sat on a bench in the shade in front of an impressive fountain. I needed some timeout  after the Staglin incident. After some quiet contemplation, I headed into the reception, explained the challenge and was escorted to a huge, magnificent tasting room.  A lively, enthusiastic tasting crew member was really helpful & fun guiding me through my wine picks. I decided to focus on Merlot, tried three and picked the 2012 Stout Vineyard, Napa Valley Merlot, lush, soft ripe aromas and flavours of black cherry, plum with a hint of  tea. 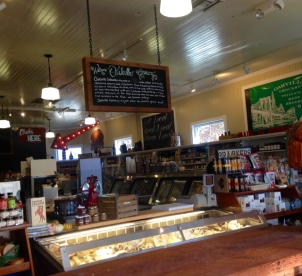 I was feeling hungry, and was delighted Gregory’s  pick of Oakville Grocery, the oldest  in California, established in 1881, was fairly nearby. They sell locally sourced food and drink from Napa & Sonoma, perfect picnic supplies,  and have a huge range of goods & produce.  Another fab foodie place to visit – and pretty busy with a breakfast and sandwich menu. I chose the Cubana or Cuban sandwich ( a nod to the Jon Favreau movie Chef). A soft roll smeared with yellow mustard, mojo sauce,filled with pepperonata, Hobbs ham, pork loin, swiss cheese topped with pickles then toasted in a plancha  or sandwich press.

Layers of tangy, piquant flavours, oozing cheese and the perfect pick me up after all that wine tasting. I had a nitro cold brew coffee, made in a similar way to beer to deliver a creamy frothy head,  just like a cold Guinness. A welcome refreshing drink – with enough caffeine to keep me alert for the  fifth and final vineyard – and boy was I going to need it! Sat Nav set to head for Kunde Family Winery in Sonoma, recommended by Elisa, a Sonoma born ex pat living in London. As I drove through a forest the road began to get steeper and steeper, narrower, and darker. My rental car with automatic gears and dodgy steering started to struggle. The trees thinned out slightly, to reveal the sheer drops and  hairpin bends.  I started to feel more than slightly uncomfortable trying to keep the car on the road.  Especially as the only other 2 vehicles were  4×4 pick up trucks with big tyres. My sat nav was taking me over Mt. Veeder. There were a few hair raising moments as the car’s rear end slid round a few of the extreme bends.  I negotiated the plateau and headed down into the Sonoma valley and was more than a bit relieved to get out the car for some fresh air and a walk.

My final vineyard had absolutely stunning, breathtaking views of hillsides of vines with the leaves a burnished red and the most beautiful setting around a lake . Kunde, a 4th generation family winery,  was worth the extreme driving experience  to visit. I tried the 2013 Malbec, 2012 Cabernet Sauvignon Drummond  and the 2014 Reserve Century Vines Zinfandel and had a couple of sips of the last wine – justified by that drive. This final wine was made from vineyards I had driven nearby on the slopes of Mt. Veeder. I really enjoyed the  aromas and flavours of cherry, plum, cranberry with the typical spiciness of black pepper and a slightly smoky finish. I decided 4 wines was going to be my limit, so opted not to buy anything.  I will definitely return to Kunde and do a proper tasting & armed with a bigger suitcase- buy some more wine.

As the sun began to set over the valley I reflected on my action packed day and my successful speed wine buying challenge – 5 vineyards in 5 hours. I bought some fabulous wine for Christmas & the holidays &  also survived to tell the tale!