As my co-blogger, Lindsey observes in her latest post, it’s been quite a week at the Olympic Games in #Rio2016, with world records falling like ninepins and @TeamUSA and @TeamGB leading the Gold Medal Stakes, as at the time I write this post

In the middle of all this sporting excitement, I returned from my family’s annual summer vacation on beautiful Cape Cod, Massachusetts to a stormy, hot and steamy Westchester County, NY

With the Olympics taking place in the southern half  of the American continent, fish on my mind, from taking my kids to see the catch being landed on the Cape and looking for a light summer dish to cut through the NY humidity, I made what I believe is one of the greatest summer fish dishes to come out of Central and Southern America, Ceviche

Most countries, from Mexico down, have their own national version using different fish and ingredients but I rather like the way the Costa Ricans make theirs. They use sea bass lots of limes and a magic ingredient, not found in the versions from neighboring countries. Ginger Ale, no less! 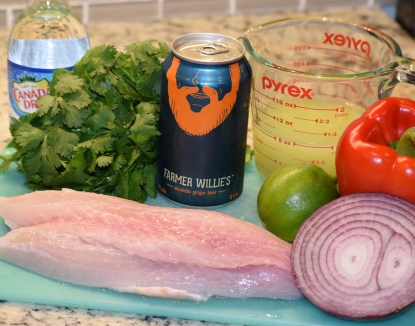 The Ingredients including some of Cape Cod’s finest Ginger Beer

I suspect the brew that Costa Ricans had in mind was the soda variety but I came across this fantastic slightly alcoholic natural ginger beer, home  brewed by Farmer Willie on Cape Cod, with hints of lemon and other more exotic flavors which has been turned into a wicked product by a couple of college guys who went into business with the Farmer. My wife and I love the ginger stuff. So I decided, why not use it in my version of Costa Rican Ceviche? It worked a treat

I just love this slightly lime acid cooked fish with its flavors so reminiscent of the region. The taste of summer on the beach from Central to South America (and maybe even, Cape Cod MA). A perfect dish to celebrate the champions of Rio 2016 and beyond!