I have always been interested in food trends and travel so it was with excited anticipation I checked out Smorgasburg in Brooklyn, New York on Halloween. This is a must for street food lovers that started in 2011 as an off shoot to Brooklyn Flea. It is held every weekend outdoors until 21 November at  East River State Park (Kent Avenue & N 7th Street) on the Williamsburg waterfront. In the Winter Smorgasburg & Brooklyn Flea go under cover at Industry City, Sunset Park ( 241 37th Street, Brooklyn).

Scotch Eggs from a Frenchman in New York!

With so many options to choose from I decided I would try the two stands with the longest lines, one sweet, one savoury. I started with Home Frite – hand cut fries served with a range of interesting dips. The most popular dip was lemon garlic aioli but I decided to try the vendor’s favourite, chipotle ranch which was tangy, creamy with a chilli kick and a great pairing with the fries.

Take a dip with a chip/fry 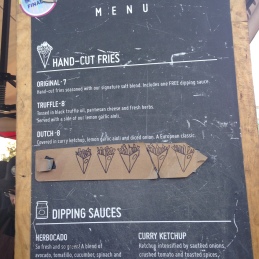 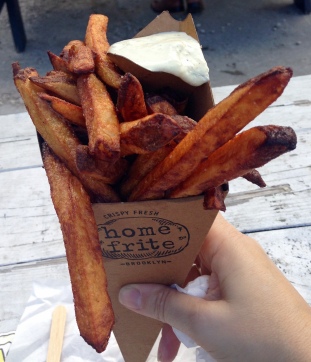 For my sweet fix there were many American classics on offer including donuts, cookies, whoopee pies, and cheesecakes. I decided to try something I have never had before- butter cakes from Gooey & Co, a speciality from St Louis Missouri created in 1930’s. They were bite sized layered cake bites with a cake base, custard middle layer and crispy crumble top. They were sweet, gooey and quite indulgent but a perfect finale.

I would have loved to taste more at Smorgasburg so in the words of Arnold Schwarzenegger I’ll be back!